Cost per session: Adults £4, Students 13 years + £2. This class is suitable for women and men of all ages.

Women the length of the country have begun playing the game of Walking Netball for the fun, laughter and camaraderie.  The social sessions bring as much as much benefit as the health benefits on offer. It can give those who feel isolated an outlet, provide an activity for those who don’t deem themselves fit enough to run anymore and offer a stepping stone for those looking for a pathway back into netball. 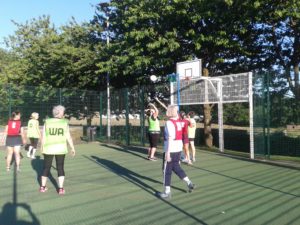 The group played a friendly match in June 2019 against Barton Road Community Centre.

Everyone had a great time and enjoyed the competitive game. 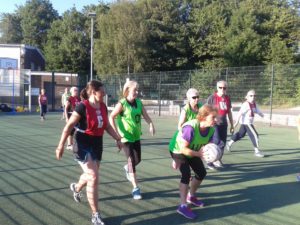 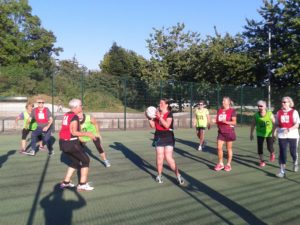 Walking Netball has evolved from a growing demand for walking sports. You may be surprised by how much fun walking netballers can have, how much fitter and healthier they will feel and how much they can achieve.

Although Walking Netball has been designed as a slower version of the game, it is netball, but at a walking pace.

The game has been adapted so that anyone can play it regardless of age or fitness level and we certainly raise our heart rates during our sessions, often through laughter as well as the low impact cardio exercise that the activity provides.

Led by coach Janet Winstanley, each session consists of a warm-up, fun drills and game play.

From those who have dropped out of the sport they love due to serious injury, to those who believed they had hung up their netball trainers many years ago, it really is for everyone.

We play Wednesday evenings from 7.00pm – 8.00pm at The Centre at Halton, outside, if the weather permits, but we have the option to play indoors as well.

Watch this great video from Boris Productions which will definitely inspire you – https://youtu.be/QRFzizitqAs

or check out our brain training exercise below